The Missoula Fire Sciences Laboratory maintains calibrated thermal infrared cameras for use in the field. This equipment allows us to directly observe wildland fire as it progresses across the landscape. Field observations are important because one of the perennial questions of wildland fire science is: "How well do these laboratory experiments represent what is happening out in the world?"

All our ideas of how wildland fires spread are based on how heat energy is transferred from the things which are burning now to the things which will shortly be burning. We believe that the majority of this heat is transported via radiant energy. The flaming front is composed of many tiny particles which are so hot that they are glowing bright yellow. This bright yellow light shines on the unburned fuels ahead of the fireline, warming them until they are hot enough to burn. What we perceive as a single fire front creeping across the landscape is really a continual transfer of heat, via radiant energy, from "burning hot" things to other things which are not yet hot enough to burn. Thermal imaging cameras observe this transfer of energy.

The world looks different in the thermal infrared, but in many ways it should seem very familiar. We are, after all, looking at the same things. We are just using a different tool to view the same world. The movies would have you believe that infrared cameras can see clearly through walls but reality is far stranger than the imagination of screenwriters. Here is a short list of the most important similarities and differences to consider when dealing with the thermal infrared instead of "regular" light.

Perhaps most important is that small temperature differences make a large impact on how brighty an object glows. Using the wavelengths harnessed by the naked eye, we can't look at the hood of a car and see whether the engine is hot or cool. Objects don't start to glow a dull red until about 700 - 900 Centigrade; anything cooler than that and all temperatures look the same to our eyes. In the thermal infrared, all objects glow, and small temperature differences are obvious to any observer who cares to look.

As you can see in the picture above, clouds are just as visible in the thermal infrared as they are in visible light. They are also just as opaque (can't see through them.)

Smoke from wildfires appears less dense to thermal infrared cameras than to our eyes. It is not invisible, but we can see further through it than we could using visible light.

For our purposes, on the landscape, we cannot measure temperatures with an infrared camera! Fortunately, we want to measure energy and not temperature. In order to measure temperature, we would have to take the energy measurement from a pixel and calculate a single temperature for a single object. In the above picture, each pixel on the hillside contains many things: some on fire, some about to be on fire, and some which were just on fire. But we only get one number from each pixel, and that number is the total energy received from all the objects which lie within the pixel. It is not temperature.

Our thermal infrared cameras find uses in the lab, in the field, and occasionally in the classroom. We have two cameras, each covering a different spectral "window" through the atmosphere. Which camera is pressed into service depends on the needs of the experiment. Sometimes the spectral bandpass is the deciding factor, at other times portability is key, and occasionally we use whichever camera happens to be available at the time. Due to the nature of wildland fire, we are not always able to schedule events to avoid conflict with laboratory experiments.

Cameras in the lab

Laboratory studies using our thermal infrared cameras span the gamut of wildland fire scientific investigation. The cameras are sometimes used to complement other instruments in an experiment to gain insight into the phenomenology under study. At other times, the experiment could not be performed at all without the camera. These instruments have been used to study the radiative energy of fire, the role of convective activity in fire propagation, and the smoldering combustion of duff.

One of the cameras is capable of capturing 120 images every second. This ability allows us to observe and analyze convection processes which would otherwise remain out of reach.

Cameras in the field

The most frequent use of our cameras in the field is to serve as "ground truth" for airborne or satellite observations of fire. We use these data to validate fire detection and burn scar algorithms, as well as to observe and record fire phenomenology for analysis. The infrared cameras provide high-resolution, radiometrically calibrated imagery of a fire front typically at the same time an aircraft or satellite observes the fire. This serves as a good intermediate-scale source of data between in-situ instruments (which typically provide very detailed information about a single point) and coarser-scale instruments (which typically cannot resolve details finer than 10m x 10m.)

Shown below is an example of data acquired during a campaign using the above methodology. The background imagery draped over the elevation model is thermal data acquired from an aircraft flying approximately 10000 feet above ground level. The inset in the lower right is an observation from the infrared camera made at the same time as the aircraft passed overhead. On the lower left is a picture of the camera in action. The camera was set up on the hillside facing the fire front, which in this case was a burnout operation. Roads are clearly visible in both images as dark (cool) lines criss-crossing the hillside. 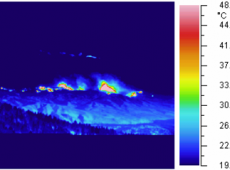 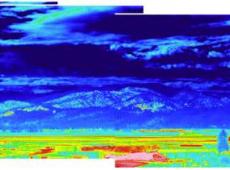