Lidar (light detection and ranging) technology uses a laser beam to determine atmospheric properties scanning system is used to monitor atmospheric properties of smoke plumes during fires. Historically, lidar measurements in the troposphere were focused on investigating the vertical distribution of gases and aerosols and studying atmospheric processes within the boundary layer (the portion of the atmosphere closest to and most influenced by the Earth's surface). However, the lidar technique has been increasingly implemented to investigate smoke polluted atmospheres.

Lidar provides a three-dimensional image of the optical characteristics. For investigating wildfires, lidar is usually mounted on an airplane, making the process expensive to use and limited in its range of applications. To move this kind of technology into the field, researchers at FFS developed a truck-mounted lidar.

The Fire Lab’s elastic lidar is used to conduct research related to smoke plume properties, propagation, and dynamics. It is a small, scanning system that uses laser light backscattering to obtain the relative distribution and properties of smoke particulates and the amount of atmospheric attenuation (the gradual loss in intensity of light through the atmosphere). The lidar scanning system is composed of several elements (Figure 1). A short-pulsed Nd:YAG laser (1) operating at two wavelengths (355 nm and 1064 nm) simultaneously, is used as the light source. The laser is attached directly to the top of a receiving telescope (2). The laser beam is emitted parallel to the telescope after going through a periscope (3); the periscope simplifies the alignment of the laser beam and increases the total measurement range. The telescope-laser system is able to turn rapidly 180° horizontally and 90° vertically using computer-controlled motors incorporated into the telescope mount (4).

The lidar can be programmed to scan in any direction, providing critical, real-time, short or long-term monitoring while operating from a safety zone outside a fire perimeter. The operating range of the lidar extends from 1 to 20 km (0.6-12.4 miles), depending on atmospheric conditions. Due to its compactness and portability, the lidar can easily be deployed in the field. The lidar is transported by a specially designed mobile instrument vehicle (Figure 2) that has an independent power supply (a generator) for operating in remote wilderness areas.

Lidar is an invaluable tool that can effectively provide several types of measurements in smoke-polluted atmospheres:

1. Vertical scans of smoke plumes and smoke layering can give information about the height of the plume and vertical transport of smoke particulates (Figure 3).

2. Time series measurements of smoke layers in the vicinity of wildfires can give information about the temporal behavior of these layers and their evolution in the evening, overnight, and in the morning.

3. Measurement of the vertical profiles of smoke optical characteristics (Figure 4) can provide an estimate of vertical smoke concentration and its temporal changes during day and night. 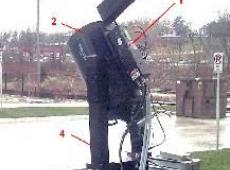 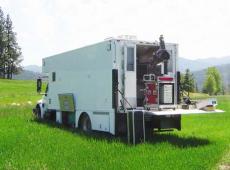 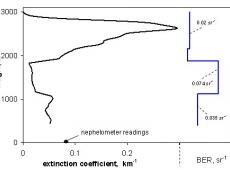 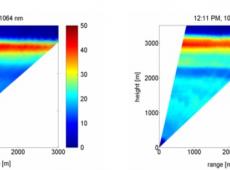