In the United States, outdoor target shooting has been suspected as the source of numerous wildland fires. The ammunition involved in most incidents is thought to be of ordinary commercial varieties with bullets composed of inert materials including lead, steel, and copper. No scientific studies have specifically addressed projectile behavior or properties related to ignition of wildland vegetation or organic materials. FFS Research Forester Mark Finney and collaborators from the San Dimas and Missoula Technology Development Centers conducted experiments to examine the potential for rifle bullets to ignite organic matter after impacting a hard surface. The tests were performed using a variety of common cartridges (7.62x51, 7.62x39, 7.62x54R, and 5.56x45) and bullet materials (steel core, lead core, solid copper, steel jacket, and copper jacket). Bullets were fired at a steel plate that deflected fragments downward into a collection box containing oven-dried peat moss.

The researchers found that bullets could reliably cause ignitions, specifically those containing steel components (core or jacket) and those made of solid copper. Lead core-copper jacketed bullets caused one ignition in these tests. Ignitions of peat also occurred in a small set of tests using solid copper bullets and a granite target. Thermal infrared video and temperature sensitive paints suggested that the temperature of bullet fragments could exceed 800 °C (1,472 °F). The size of bullet fragments also facilitated ignition, with larger fragments being more likely to cause ignitions. Bullet fragments from solid copper and steel core/jacketed bullets collected from a watertank were larger than those from lead core bullets.

This research found that the kinetic energy of bullets is transformed into thermal energy by plastic deformation and fracturing of bullets because of high-strain rates during impact. Fragments cool rapidly but can ignite organic matter, particularly fine material, if it is very dry and close to the impact site. Prior to this study, there had been no scientific basis to inform policy concerning shooting on public lands. This research showed that ignition by commonly available ammunition was physically possible. The BLM in Utah and Nevada have already used this information to issue Fire Prevention Orders restricting the use of steel core/jacketed bullets during dry summer months. Further research will be directed toward testing under field conditions. 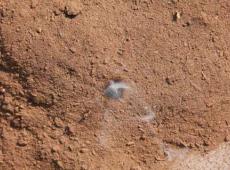