In 2014, RMRS fire danger rating system developers sought and gained approval to update the U.S. National Fire Danger Rating System (NFDRS). This system has remained static for nearly 40 years, despite many scientific and technological advances that could significantly improve the system. These system updates have been approved by the Fire Danger Subcommittee of the National Wildfire Coordinating Group (NWCG) and by the NWCG Executive Board. The new system will be implemented and tested over the next two years and is expected to be fully operational in January 2016. Approved changes to the NFDRS include: incorporating the Growing Season Index (GSI) to compute live fuel moistures; incorporating the Nelson model to compute fine dead fuel moisture; and reducing the number of fuel models in NFDRS. More information can be found in a recorded presentation located at http://www.nwcg.gov/branches/et/fenc/subcommittees/fds/index.htm.

The Wildland Fire Assessment System (WFAS) is an integrated, web-based resource to support fire management decisions. It serves as the primary distribution platform for spatial fire danger data to a nationwide user base of federal, state, and local land managers. This web-based platform saw over 41,100 users with nearly 200,000 page views during 2014. The system provides multi-temporal and multi-spatial views of fire weather and fire potential, including fuel moistures and fire danger classes from the NFDRS, as well as Keetch-Byram and Palmer drought indices, lower atmospheric stability indicators, and satellite-derived vegetation conditions. It also provides fire potential forecasts from 24 hours to 30 days.

WFAS developers, working closely with federal fire managers from the U.S. Forest Service and the National Park Service as well as fire weather forecasters from the Bismarck Weather Forecast Office of the National Weather Service, created an automated fire danger distribution system for the state of North Dakota. This system leverages established fire danger calculations from weather stations statewide to provide daily assessments of fire danger to local, state, and federal agencies. This partnership was forged over the last two years and the system became operational in January 2014. Fire danger maps are produced daily for the state of North Dakota along with text products that indicate the fire danger by county. In the coming year, this system will be expanded to include South Dakota and eventually it will encompass the entire Great Plains.

In 2014, WFAS developers worked closely with researchers from the University of Idaho, the University of Montana, and U.S. Forest Service Region 1 to develop the TOPOFIRE web display and analysis system (http://topofire.dbs.umt.edu) for processing and displaying spatial weather data that can be used to support the development of the next generation of NFDRS and WFAS. The system is a NASA Earth Sciences Applications-supported project aimed at streamlining the development and use of spatial data for wildland fire decision making. The system will provide access to a wealth of high-resolution spatial weather data that will significantly enhance WFAS products. NASA saw the value in the project and will continue funding further development and refinement of the system over the next three years.

Development of a new tool to combine airborne and spaceborne laser scanner data with passive remote sensing-derived canopy fuel products from LANDIFRE is underway. This new tool is being developed in collaboration with the U.S. Geological Survey (USGS) Earth Resources Observation and Science (EROS) Center and will provide rapid integration of highly detailed LiDAR into fuels maps used for fire behavior predictions. Called CHISLIC (Creating Hybrid Structure from LANDFIRE/Lidar Combinations), it will function as a desktop tool that derives its spatial data from web data services provided by WFAS.

WFAS now produces seven-day outlooks daily for more than 1,000 weather station points. These outlooks are being used operationally to produce seven-day fire potential forecasts for every geographic area in the continental United States. These seven-day forecasts provide a much longer fire danger outlook than was previously available and are providing fire managers with tools to meet strategic planning needs. WFAS developers in FMI have also designed and implemented a state-of-the-art web mapping interface for the display and analysis of remotely sensed spatial fire potential data. This new interface allows the rapid assessment of fuel conditions across a landscape and provides managers with several tools to assess fuel changes over time. The system is built on a suite of open-source tools that provides a means for efficient storage, display, and analysis of large spatial datasets. This new framework will be a building block for a new, integrated fire danger display and analysis system. The new interface complements the existing static LANDFIRE national maps and will provide more system flexibility by allowing users to define their own area of interest, link to weather station data in a tabular format, and search for map features. The prototype for the interactive map can be accessed on the WFAS website. This web mapping and analysis interface will provide the tools necessary for the rapid and effective dissemination of large spatial datasets to the fire management community and will ultimately serve as the development platform for the next generation of fire danger rating systems.

These maps are produced daily as part of the North Dakota fire danger rating system prototype. 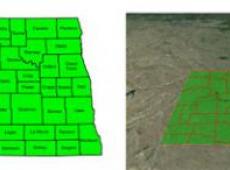 These maps are produced daily as part of the North Dakota fire danger rating system prototype.