Perhaps one of the most critical decisions made by firefighters during daily fire management operations is the identification of suitable safety zones.

As a consequence of 11 firefighters being killed on the Inaja Fire in 1957, the U.S. Forest Service issued a report recommending that firefighters identify safety zones at all times when fighting fire. This recommendation has been further developed into a requirement for all wildland firefighters. It is the intent that safety zones be available and accessible in the event that fire behavior or intensity increases suddenly making current tactics unsafe.

More than 50 years after the Inaja Fire, firefighters continue to be injured or killed by fire entrapments. Wildland firefighters must estimate fire behavior prior to implementing tactics and then continually adjust estimates as conditions change through the burning period. Current wildland firefighter safety zone guidelines are based on studies that assume flat terrain, radiant heating, finite flame width, constant flame temperature, and high flame emissivity. However, firefighter entrapments and injuries occur across a broad range of vegetation, terrain, and atmospheric conditions and are not confined to radiant heating or flat terrain. Convective heating should be considered as a potential heating mode, and therefore complex terrain and wind must also be considered.

Quantitative guidelines for selecting and sizing safety zones have been developed with funding support from the Joint Fire Science Program, the office of the Deputy Chief for Research in the Forest Service, and others. These current safety zone are published in the S-course curricula, Incident Response Pocket Guide (IRPG), and Fireline Handbook. These guidelines were developed based on the assumption that the fire and safety zone were located on similarly sloped terrain (e.g. the safety zone upslope from the fire).  Situations where the safety zone is located on the flat top of a ridge with steep slopes below result in fundamentally different heat transfer conditions that likely will imply different (often lower) safe separation distances do to reduced exposure as distance from the slope edge increases.  These guidelines were developed specifically to prevent burn injury to humans, they do not apply to ignition limits and associated separation distances for structures.

New research is focused on measuring and predicting the cumulative impact of convective and radiant energy transfer on safety zone shape, size and location when the safety zone and/or fires are located on slopes or are burning under the influence of wind. Measurements and newly developed theoretical modeling tools are being used to explore the expected range of slopes, safety zone locations and fire intensities.

The objectives of this study are to review current understanding of heat transfer in wildland flames, summarize current knowledge of how humans are injured by heat and smoke, compare current safety zone guidelines, define the primary factors that should be evaluated within the context of safety zones, recommend new guidelines that account for convective heating, and suggest future research needs. We expect the new guidelines will depend on multiple variables including: fire characteristics (flame length or height) and site characteristics (e.g. slope percent) and relative location (i.e. chimney, ridge, midslope, ridgetop). Special emphasis is placed on the effect of “chimneys” and other terrain features that produce dangerous levels of convective heating ahead of the fire front. Additionally, consultation with the wildland fire management community has identified the need to explore the flow field around structures in the context of safety zones.

Direct measurements of radiative and convective heating from actual fires have been collected and studied to better understand heat transfer in wildland flames. Measurements reported by collaborators from interagency hotshot crews and incident management teams, Brigham Young University, Eglin Air Force Base, and the Bureau of Land Management were included. To summarize current knowledge of how humans are injured by heat and smoke, safety zone modeling and experimental studies were reviewed and a selection of wildland fire entrapment case studies were examined. More than 800 computer simulations were completed to evaluate the effect of wind, slope, and fire intensity on exposure level. Injuries occurred when firefighters were exposed to heating levels greater than 6 or 7 kW/m2 for durations longer than 60 seconds. Firefighter injury was found to be due to direct exposure to fire through three mechanisms: 1) inhalation of toxic gases that poison biological functions, 2) inhalation of hot gases resulting in tissue swelling to the point of obstructing air exchange to the lungs, and 3) thermal injury to skin either through convective or radiative heating. Ideally, the wildland firefighter safety zone should be selected to prevent injury from all three mechanisms.

New guidelines are under development that will link slope, wind, and fire intensity to safety zone size. These guidelines are expected to take the form of simple rules, Pocketcards, and smart phone apps. Ultimately this research will make fire managers and firefighters safer and more effective.

The following is a preliminary product from this effort. It is based on limited data and simulations. It is presented as a place holder until further analysis can be completed.

Based on current findings relative to energy transport from wildland fire in the presence of slope and wind, the following safety zone rule is proposed. The calculation also will be based on vegetation height rather than flame height. The proposed Safety Zone Rule is: SSD=8 Δ Hveg where SSD is safe separation distance or radius of the safety zone, Δ is the slope/wind factor from table below, and Hveg is vegetation height. The equation is nondimensional which means that as long as the user is consistent any units will work (i.e. if vegetation height is in feet than the SSD is in feet). The value for Δ given in the table below is based on wind in mph and slope in %. But the actual value for Δ is nondimensional. So as an example, if a firefighter were working on a fire burning in sage brush that was 3 ft tall and the proposed safety zone was located in an area with a general slope of 15% and the wind speed expected for the upcoming burn period was 10 mph, with the conditions (fuel moisture, relative humidity, air temperature) generally moderate, the value for Δ would be 2. Thus the safety zone should be large enough to provide a minimum separation from sage brush of 8 x 2 x 3 ft = 48 ft. If the vegetation height were given as 1 meter than the SSD would be 8 x 2 x 1m = 16 m. An additional distance would be required to provide space for crew and equipment. Generally a crew of 20 people would require an additional 5 to 10 ft of radius, addition of a vehicle would require an additional 5 ft in radius.

The area highlighted in orange (see safety zone chart) corresponds to conditions under which large natural openings are required or mechanized equipment would be required to construct safety zones. Otherwise alternative tactics should be considered such as additional lookouts to monitor fire activity, enhanced methods to exit fire area, or modified decision points that would trigger egress earlier in the burn period.

The multiplier selection should be determined based on current and forecast weather, fuel conditions and fire behavior. For example a situation where the fire is or will be burning at what could be considered higher than normal intensity (possibly due to low fuel moisture or low relative humidity) would use a higher multiplier than the multiplier selected for a fire forecast to burn under moderate conditions.

-Disclaimer: This proposed safety zone rule should be considered preliminary and subject to increase or decrease based on analysis of additional data.

-Monitor this site for updates. 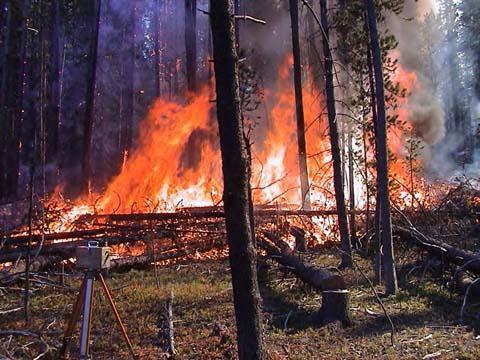 Fire intensity sensor installed on a fire on the Tenderfoot Creek Experimental Forest in western Montana. Data were used to establish heating ranges and durations from exposure to wildland fire. 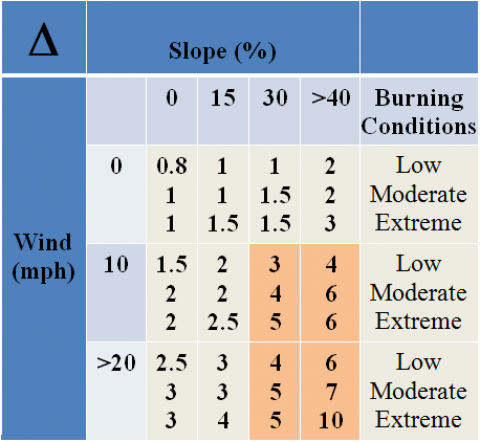