The fire spread process is fundamentally a series of ignitions, where a parcel of fuel ignites and burns at a particular rate, heating the neighboring fuel parcel until it subsequently ignites.  The burning rate (and the associated heat release rate) of a fuel parcel or section of a fuel bed is therefore a critical piece of the fire spread process.  However, current operational models don’t treat fire spread in this manner, and assume that the is already fire spreading and at a constant rate.  To alleviate these assumptions and allow future models to predict accelerations, decelerations, and thresholds in fire spread (will it even spread at all?), new operational fire spread models will need to treat fire spread as a series of ignitions, incorporating understanding of the fuel bed burning rate.  To capture thresholds for fire spread, knowledge of the flaming duration of a fuel bed, or the “flame resident time,” is required as well.  If this flame residence time is less than the ignition time of the next fuel parcel, the fire won’t spread.  Though the flame residence time is simply related to the amount of fuel present and the rate that it burns, no single theory exists for the prediction of flame residence time.  Better understanding of flame residence time and burning rate of fuel structures will thus allow for better fire spread and fire effects predictions.

The burning rate and flame residence time of fuel structures are studied using ordered cross piles of sticks called cribs, commonly used in the fire protection engineering (structural fire) literature.  Even though wildland fuels do not have the same predictable arrangement as cribs, wildland fuels are similar to cribs in that they are essentially individual fuel particles arranged with some spacing distance between them. Thus, the fundamental understanding of what governs the burning rate of a crib would apply to the wildland fire context.

Though cribs are used frequently in fire protection engineering as ignition sources for other materials, the relations developed to predict their burning rate were based on a relatively limited set of data from cube-shaped cribs.  The first step of this research examined cribs with a wide variety of layouts and geometries to test whether these predictive relations were valid for fuel beds that are more applicable to the wildland context.  The wildland context also includes many other fuel and environmental conditions not addressed in our current understanding of the mechanisms the govern the burning rate of porous fuel beds like cribs.  Experiments are conducted to address these gaps which include:

For this last scenario, large fires likely burn differently than small fires because of the formation of tall and wide plumes above the fire, generating a form of fire-atmospheric interaction.  This is explored experimentally in lab-based studies through the use of a chimney to mimic the fluid dynamic changes thought to occur in these large plumes.  Cribs are built with different stick thicknesses, lengths, densities, and geometries to understand how the fuel bed structure and the environmental conditions listed above interact to affect the burning rate. 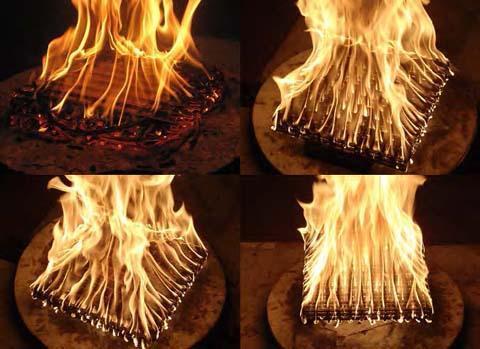