Agriculture is a vital part of the Northwest’s economy and is critical to the region’s rural communities. The production cycle of cereal crops and grasses, which are important agriculture products of the Northwest, includes burning fields of post-harvest residue such as wheat stubble. Like smoke from forest fires, smoke produced by agricultural burning can have harmful effects on public health. To protect public health, smoke management agencies of the Northwest regulate agricultural burning by deciding how much, if any, field burning can occur on a given day. They use air quality forecasting models that predict the amount and composition of smoke produced and the dispersion of the smoke and its concentration at population centers. Smoke managers have reported that the models do not work well under certain conditions, resulting in significant smoke impacts on local populations. The developers of the air quality models and smoke managers need an extensive dataset of in situ observations of agricultural smoke production and dispersion in order to improve these critical air pollution forecasting tools.

The RMRS Smoke Emission and Dispersion Research Team, composed of FFS researchers at the Missoula Fire Sciences Laboratory, was asked to participate in a large research project organized by the Environmental Protection Agency (EPA). The project was designed to obtain the data necessary to improve the air quality models used by smoke managers in the Northwest and included researchers from the EPA’s Region 10 and Office of Research and Development, the U.S. Forest Service’s Pacific Northwest Research Station, the USDA’s Beltsville Area Agricultural Research Service, Washington State University, Washington State Department of Ecology, and the Nez Perce Tribe. The Smoke Emission and Dispersion Research Team used smoke chemistry measurement instruments on a U.S. Forest Service Cessna aircraft to measure emissions and smoke dispersion from seven agricultural fires in Idaho and Washington during August 2013.

This study measured emission factors for carbon dioxide, carbon monoxide (CO), fine particulate matter (PM2.5), soot, and 45 volatile organic compounds. The emission factors and airborne measurements of smoke dispersion (quantified by CO concentrations) are being used to improve agricultural emission inventories and improve smoke dispersion models. In particular, the smoke dispersion measurements taken by aircraft have helped identify and reduce deficiencies in the plume rise algorithms. The improvements in plume rise algorithms enabled by this project are expected to reduce the errors in air quality forecasting models used to regulate agricultural burning. While results are still being implemented, early indications are that this research may assist smoke managers in protecting public health, while helping to safeguard the economic livelihood of the Northwest’s agricultural communities. 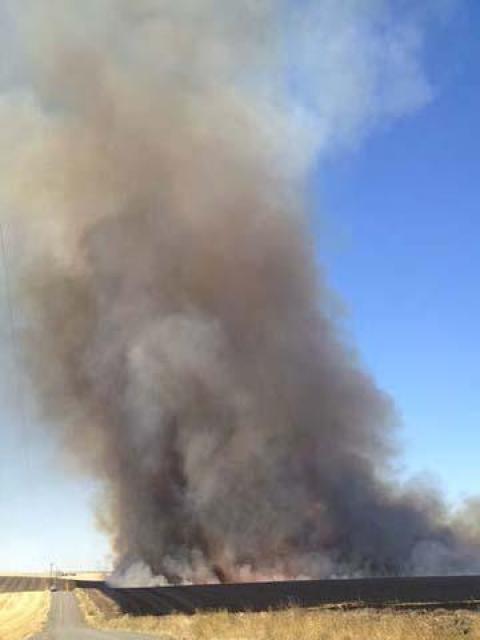