We are developing a product and methodology that allows rapid assessment of fuels and potential fire hazard in forests impacted by the non-native balsam woolly adelgid (BWA) to better protect and improve the health of western America’s high-elevation fir forests. We will 1) compare fuel metrics derived from standard field procedures with aerial and terrestrial lidar-derived fuel metrics and 2) use physics-based fire behavior models to simulate fire behavior in stands spanning a range of BWA severities, allowing fuel hazard quantification in BWA-impacted forests across a range of weather scenarios. The results will be compiled into a photoguide to allow users to rapidly assess BWA severity, fuel conditions, and potential fire behavior.

Balsam woolly adelgid (BWA) is a non-native, sap sucking insect with the potential to cause widespread mortality of true firs. Although BWA have caused damage in the Pacific Northwest since the 1930s, BWA have only been detected in Idaho since the 1980s and Utah since about the mid-2000s. In Region 4, mortality has been observed to occur within 1-3 years at the warmest and driest sites. The ecological sustainability of subalpine fir and other true fir host types is a primary concern in these areas as stands are highly susceptible to BWA-caused mortality and all age classes of trees are attacked, having implications for natural regeneration. Spruce beetle and mountain pine beetle outbreaks have significantly impacted high elevation forests, such that subalpine fir is often the only conifer species remaining and has been identified by the Intermountain Adaptation Strategy for climate change as a species at risk. In 2019, Aerial detection surveys (ADS) recorded 350K acres of BWA-killed trees in Region 4 and estimates are expected to increase as detection methods improve as an additional 300K+ acres within BWA’s range is recorded simply as subalpine fir decline complex.

The tendency of true firs to retain dead green and red needles may increase fire behavior and fire severity. If BWA-killed trees with needles have much lower fuel moistures, flammability may significantly increase. Several communities in both Idaho and Utah have inquired about fire behavior and BWA, and the UT Dept. of Forestry, Fire, and State lands has many requests from landowners. Operational fire models (Behave Plus, FlamMap) cannot utilize within-stand vegetation and fuel detail, instead relying on stand-level metrics, with low sensitivity to fuel changes and underprediction of crown fire occurrence and spread rates. The ability of physics-based fire models such as the Wildland-Urban Interface Fire Dynamics Simulator (WFDS,) to account for these factors may provide greater insight into the effects of BWA-impacted stands on fire behavior. Improved fire behavior modeling will benefit both federal land managers in directing fuels treatments/funding for treatments to higher severity areas and would benefit private landowners in quantifying the need for treatment on private lands and protecting developed recreation infrastructure.

Airborne Laser Scanning (ALS; aerial lidar) coverage is becoming increasingly widespread across forested land and availability of ALS-derived data is becoming a growing priority for State and Federal agencies. ALS has been used to effectively quantify canopy fuel metrics but is less successful at measuring surface and ladder fuels, particularly in dense stands, such as is common in fir-dominated forest types. Terrestrial laser scanners (TLS; i.e. ground-based lidar) are an emerging technology that can finely map both surface and canopy fuels and have the potential to greatly reduce field-based data collection times, while also producing high-resolution data. However, stands with particularly thick canopies or high tree densities may in this instance reduce effectiveness of TLS scans in quantifying canopy fuels. While comparisons between field-collected fuels data and ALS-generated data exist, data collected using standard field protocols (e.g. common stand exams, Brown’s fuel transects) and TLS-generated data have not yet been compared, particularly in disturbed forest stands.

This project will compare fuel and vegetation metrics derived from standard field data procedures with both ALS and TLS-derived metrics. Using lidar-derived fuel metrics as inputs into physics-based models (e.g. WFDS), fire behavior in selected stands spanning a range of BWA severities will be simulated, allowing fuel hazard quantification in BWA forests across a range of weather scenarios. These results will be compiled into a printed photoguide to allow users to rapidly assess BWA severity, fuel conditions, and potential fire behavior. 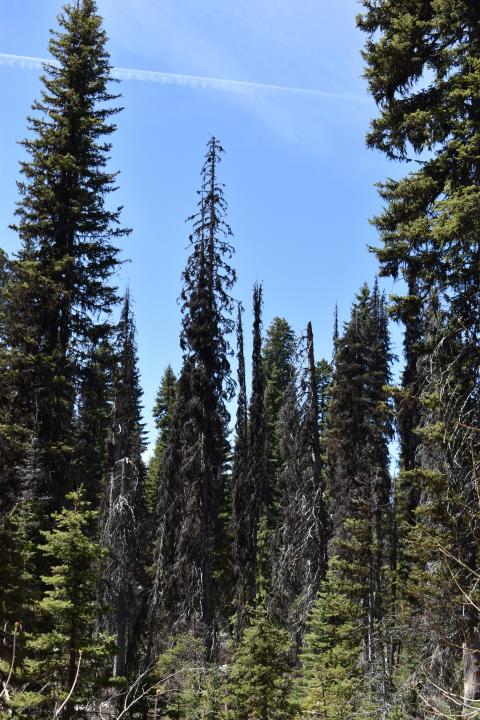